One of Terrace School's superheroes, Jack Te Kuru-Tidey, is going through a rough patch undergoing several major operations at Wellington Hospital. When he returns home, he will be away from school while he recovers. So Terrace School held a Superhero Day to help put a smile on Jack's face and show him how amazing and strong he is, as well as provide the wha¯nau with a koha to help brighten Jack's days while laid up in bed. Terrace School exploded with colour and creativity as superheroes from all over CHB descended upon the school. A few villains sneaked in but were quickly apprehended by superheroes, who also managed to raise more than $250 to support Jack's wha¯nau. The smile on Jack's face as he made a surprise visit on his way from Hawke's Bay Hospital back to Wellington for further surgery showed how much it meant to him. 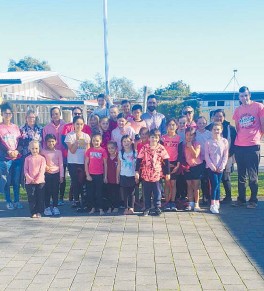