Nearly four years after thethen Cambridge Street Medical Centre’s owners announced ambitious plans for a state-of-the-art medical centre (Horowhenua Chronicle, August 18, 2017) on Levin’s Durham Street, the section is back in council hands. “When we sold the land we had a condition put in that if the community health centre wasn’t up and running by June 1 this year, we had the right to buy back the land,” said council chief executive David Clapperton. “We sold it for the purpose of a community health centre and that hasn’t happened.” The land was bought back by Horowhenua District Council for the price they sold it to the Cambridge Street Medical Centre in 2017. “Together with the community, MidCentral Health and the PHO, we intend to make that community health centre a reality,” Clapperton said. The still vacant section on Durham Street has become overgrown in recent months, with grass allowed to grow up to a metre high and encroach on to neighbouring sections. As a result, rubbish has accumulated and neighbours have observed young people smoking on the section and in the adjacent Adventure Park, fearing scrub fires. One neighbour said the fire service had been called out, dealing with fires, including one in a tree in the Adventure Park. Barbara Lilly, the section’s immediate neighbour, said she was very concerned about fire and smoke hazards affecting her home and her three small dogs. “I hardly ever leave home now. I’m scared something will happen while I am away.” She said the grass had not been mowed in months and she had noticed an increase in field mice in her garden, coming from the overgrown section, as well as weeds. When looking around her small garden it is clear that Mrs Lilly takes great pride in it. She has created an eye-catching section that makes many a passer-by stop and look. Mitch Brown, Manawatu¯ Area 14 area commander of the Fire Service, said he hoped he had been able to allay Mrs Lilly’s fears. “There is nothing happening on that section that will start a fire. “High, dry grass in itself does not catch fire.” At the time when the plans for the Durham Street medical centre were announced Cambridge Street Medical Centre’s clinical leader, Bente Ongkiehong, said the new centre would house core primary care medical services — general practice, nursing and a pharmacy. It would also have a skin cancer clinic, physiotherapy, spaces for visiting specialists and tenancies by other types of health service, a cafe and a gym. The medical centre’s business development manager, Hans Roberti, said he had approached the council with the idea of using the council land to build this medical centre on. The Durham Street section was sold to them in 2018 after the Jack Allen Community Hub, that occupied the site at the time, moved to Bristol Street. Roberti said Levin’s population growth projections showed the centre was needed, and there would be no negative impact on the town’s other medical centres. At the time he was confident with the ability of both the new building and the organisation to attract doctors to Levin, despite a significant nationwide shortage of doctors in provincial areas. The need for more general practitioners remains great in Levin and the wider Horowhenua area. Many residents do not have a GP and have to travel to one in Palmerston North, Otaki, ¯ Waikanae or Paraparaumu. Those that have a local GP often face long waiting times, varying from two to six weeks to see a doctor. The Horowhenua Chronicle tried to find out from Mr Roberti what happened to their plans, but calls to his number have gone unanswered. “There is a great need for a new health centre and there are also broader health needs in the district that need attention,” said Clapperton, who promised the section will be cleaned up soon. “Now that we own it, we can do that.” 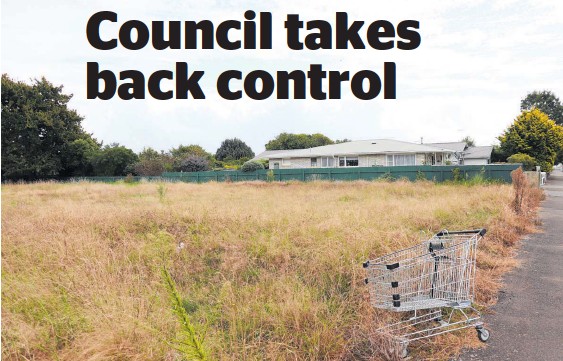